Looks like your mother was right when she told you to sit up straight.

There’s growing evidence that good posture contributes to a range of health benefits, from reducing back and joint pain to boosting mood. Health-care practitioners from physical therapists to surgeons to psychologists increasingly take posture into account when evaluating patients, and offer tips and tools for improvement.

Good posture doesn’t just mean standing with the shoulders thrown back. More important is maintaining good alignment, with ears over the shoulders, shoulders over hips, and hips over the knees and ankles. Body weight should be distributed evenly between the feet. 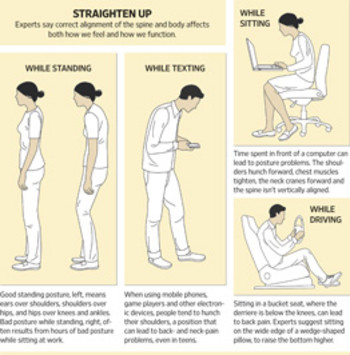 Seated posture, especially while using a computer, is critically important and deserves more attention, experts say, in part because it can affect a person’s posture while standing and walking. Experts say it is essential to think about posture while walking, getting up out of a chair or using a cellphone or tablet.

The hunched-over position of the typical electronic-device user is of particular concern, and is sparking new back- and neck-pain problems in teenagers. A study of 6,000 Finnish adolescents found frequent use of computers, mobile phones, videogame players and television was associated with greater rates of neck and lower-back pain, according to a 2006 paper in the European Journal of Public Health.

Posture is “probably the 800-pound gorilla when it comes to health and wellness,” saysAllston Stubbs, an orthopedic surgeon at Wake Forest Baptist Medical Center, in Winston-Salem, N.C., who treats patients with back or joint pain. “We see the spine and overall skeletal structure being critical to a patient’s functionality and their satisfaction with their life and health care.” 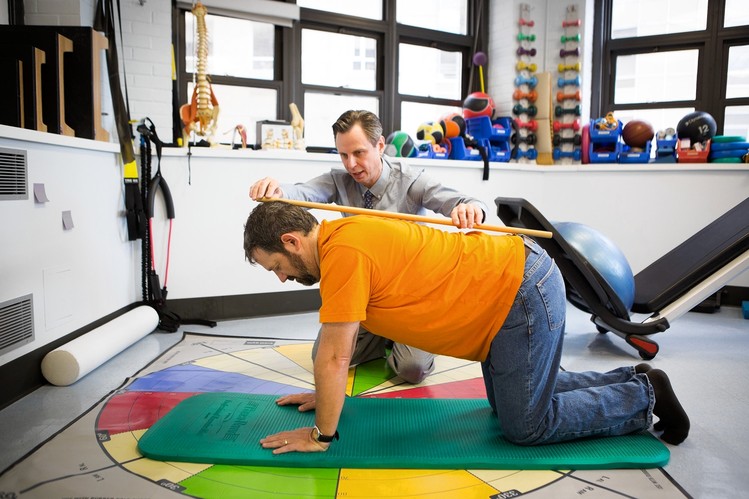 Because poor posture can often be caused by obesity or weak muscle tone, correcting it isn’t a quick fix for many patients. Even for people in good shape, bad posture habits can be so ingrained that it takes constant vigilance to improve them.

Evan Johnson, head of physical therapy at the Spine Center, a back-pain treatment facility at New York-Presbyterian Hospital and Columbia University Medical Center, starts scrutinizing patients’ posture as soon as they walk through the door. “I will go get the patient from the waiting room and escort them back. As they’re walking, you’re evaluating,” he says.

On a recent morning Dr. Johnson sat his patient on a bench. “Roll your chest up and forward. Sit tall through the top of the head,” he said, gently pulling the patient’s hair upward. “Bring your navel in.” The patient, a man recovering from back-pain surgery who declined to be named, slowly straightened up.

Dr. Johnson then put a wooden stick down the back of the patient’s shirt and asked him to stand. The stick was meant to remind him to keep his spine straight and bend at the hips as he got up. “Many patients, when they go from sitting to standing, they lose their posture. They slouch,” Dr. Johnson said.

He peppered the patient with questions. “Remind me again, do you commute to work? Do you have a bucket seat in the car?” Dr. Johnson asked. “When you have a bucket seat, your butt is way down,” which can cause back pain, he said. He brandished a wedge-shaped cushion and asked the patient to sit on it, with the thick edge in back. “It takes the bucket out,” Dr. Johnson said, so that “your behind is above your knees.”

One of the most common posture problems, called kyphosis, is a direct result of spending too much time in front of a computer, experts say. The shoulders hunch forward, the pectoral muscles in the chest tighten, the neck and head extend toward the computer screen, and the spine is no longer vertically aligned.

Many deskbound office workers have started standing and walking in this position, too, says Andrea Cheville, a rehabilitation physician at the Mayo Clinic in Rochester, Minn.

To counteract kyphosis, it is important to stretch the pectoral muscles and strengthen the trapezius muscles in the upper back, which hold the shoulder blades back, Dr. Cheville said. Remembering to keep the ears and head over the shoulders, and not jutting forward, is also important.

Another common problem is lordosis, or swayback, where the lower spine curves inward, toward the front of the body, and the butt is thrust backward. Overweight people often display this posture, as do women wearing high heels, Dr. Cheville said. Losing weight, strengthening the so-called core muscles around the trunk and pelvis and wearing flat shoes can help reverse it.

New research is also demonstrating links between body position and mood. It has long been known that depression can lead to a slumped posture. But new evidence suggests the reverse is also true—that slouching can spark negative emotions and thoughts.

In one recent study, 30 people receiving inpatient treatment for major depression disorder in Germany were divided into two groups, and asked to sit in either a slumped or upright position. Participants were shown 16 positive words, such as “beauty” and “enjoyable,” on a computer screen, and then 16 negative words, such as “exhaustion” and “dejected.”

After each word, they were asked to imagine themselves in a scene connected with the word, such as a time when they’d felt depressed or beautiful.

The participants were then distracted with other tasks for five minutes, and afterward asked to recall as many of the words as they could. Patients in the slumped position recalled more negative than positive words, while those in the upright position showed more balanced recall, according to the study results, which were published this year in the journal Clinical Psychology and Psychotherapy.

The study’s main author, Johannes Michalak, a clinical psychologist at Germany’s University of Hildesheim, said he became interested in the link between posture and mood after practicing qigong, a traditional Chinese movement exercise that he says helped boost his sense of well-being.

In a study published in the journal Biofeedback in 2012, researchers in California and Taiwan asked 110 university students to rate their energy levels, then walk in either a slouched position or in a skipping pattern. The students reported a decrease in energy levels after the slouched walk and an increase after skipping, the researchers reported.