Chiropractic treats the nervous system, the most important system in your body. Thousands of nerves that allow your brain, muscles, organs and other body parts to function connect to your spinal chord. If your spinal chord is not properly aligned (subluxated), your nerves do not function at an optimal level.

Daily routines such as work, stress, and lack of exercise all lead to an unhealthy body, which eventually leads to pain. Pain is your body’s cry for help. Many times the problems began long before the pain starts, but you do not know it.

Common symptoms include headaches, constipation, upset stomach, and more.
By seeking chiropractic treatment regularly, along with a healthy diet and exercise, you can fix the damage to your nervous system and gain a healthy life back.

Who should seek chiropractic treatment?

Everyone. You, your parents, grandparents, children, grandchildren and friends should all make chiropractic care part of a regular routine.

Birthing, learning to walk, falling, strenuous activity and more lead to a misaligned spine. With regular chiropractic treatment, you and your family can live healthier, happier, pain-free lives. 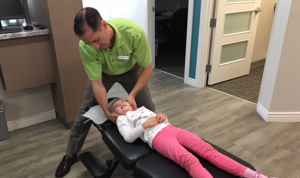 Subluxation, or misalignment, is a problem in the spine where an abnormal position of a vertebrate disturbs communication within the central nervous system causing a disturbance in the body. This disturbance eventually leads to pain.

The history behind chiropractic

Daniel David “D.D.” Palmer operated a magnetic healing office on the corner of Second and Brady streets in downtown Davenport, Iowa. Dr. Palmer realized that although various forms of manipulation had been used for hundreds if not thousands of years, nobody had developed a philosophical or scientific rationale to explain their effects. Dr. Palmer made a point to codify the philosophy, art and science of this practice. Dr. Palmer named it chiropractic which comes from the Greek words, cheir, meaning “hand” and praktos, meaning “done” — resulting in the phrase “done by hand.”

Dr. Palmer noticed that the janitor, Harvey Lillard, who worked in his building, was nearly deaf. Dr. Palmer inquired about the cause of his deafness and was informed that when Harvey was exerting himself in a cramped, stooped position, he felt something give in his back and immediately became deaf. Harvey had been nearly deaf for 17 years.

Dr. Palmer decided to examine Harvey. Upon examination, he noticed a bump, which he determined to be a spinal vertebrae out of position. Harvey said he noticed this bump right after he lost his hearing. Dr. Palmer reasoned that if the vertebra was replaced, Harvey’s hearing should be restored. With this object in view and a half-hour talk to persuade Harvey that it would work, Dr. Palmer racked the misaligned vertebrae into position by using the spinous process as a lever and soon after the man could hear as before.

From this first adjustment, Dr. Palmer continued to develop this new method of healing people and in 1897 established the Palmer School of Cure in Davenport. Dr. Palmer’s son B.J. Palmer headed the school from 1906 until his death in 1961. He changed the school’s name to Palmer School of Chiropractic, which is now known as the Palmer College of Chiropractic. Since Palmer College opened, chiropractic has developed rapidly and there are now more than 35 chiropractic schools and colleges around the world.